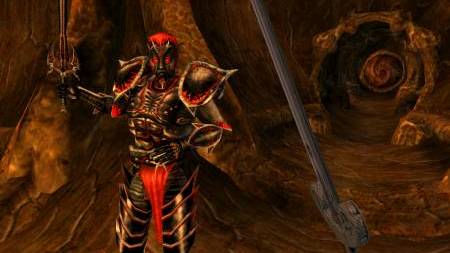 "Apparently some folks got a bit upset by reports based on Todd’s talk at QuakeCon last week. An article came out where Todd was quoted as saying we had no plans for a TES V. He did not say that. That was not a direct quote from him. That was someone’s interpretation of what he said. I know, I was there.

At his QuakeCon talk he was asked when TESV is coming out and Todd replied, “Don’t look for a new Elder Scrolls game in the near future.” He also went on to say how much the franchise means to us and that it definitely will continue. He just wasn’t going to provide any timeframe on “when.” This should not be news to anyone that has been paying attention. Both Todd and I have said repeatedly that, of course, we’re going to do another Elder Scrolls game. The last one was enormously popular. So was the one before that. You get the idea. So do we.

Todd and Bethesda Game Studios are hard at work on their next big game, and we’re not ready to discuss it. As always, we prefer to have something amazing to show when we talk about it. We aren’t going to confirm or deny or comment on speculation, nor are we going to give hints about anything. If you know us by now, you know we don’t really do that.

In regards to the MMO comment, he was asked if there was “any chance of an Elder Scrolls MMO” and he replied — in a joking fashion — by saying “I guess there’s a chance.” To be clear, Todd and his team do not make MMOs, for any franchise, at all. We have another division – ZeniMax Online Studios – which is lead by Matt Firor, and they are working on an MMO. They have not said anything about what game they are making. When ZeniMax Online is ready to show what they are up to, we’ll let everyone know. Until then we aren’t going to provide hints or speculate on what they’re doing either.

Hope that helps clear things up."